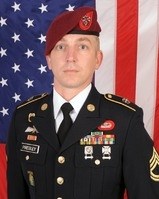 BORN
1986
DIED
2020
FUNERAL HOME
Trahan Family Funeral Home - Pensacola
60 Industrial Blvd
Pensacola, FL
SFC Levi A. Presley
Crestview - SFC Levi Aaron Presley, 34, of Crestview, FL passed away on December 12, 2020. He was born on September 6, 1986 in Milwaukie, OR.
SFC Presley enlisted in the U.S. Army in 2004. After completing basic training, he was assigned to several different duty stations as well as graduating Airborne school. He made two deployments to Iraq and Afghanistan where he was critical to maintaining the Satellite Communications Network that allowed for effective command and control throughout each country. He earned numerous awards and decorations for his achievements during his enlistment.
Survivors include: his wife, Erin Presley of Fort Bragg, NC; their six children: Kaysie, Justin, Micah, Korinne, John, and Nolan; parents, Donald C. and Jaci D. Presley; and sister, Arwen Weisser.
Levi was a great Soldier, father and hero, both to his family at home and to his 7th Group family. He will be loved and missed by all who knew him. In lieu of flowers, his wife asks that donations be made to the childrens' trusts.
Trahan Family Funeral Home is in charge of arrangements. www.trahanfamilyfuneralhome.com.
Published by The Crestview News Bulletin from Dec. 18 to Dec. 23, 2020.
To plant trees in memory, please visit the Sympathy Store.
MEMORIAL EVENTS
To offer your sympathy during this difficult time, you can now have memorial trees planted in a National Forest in memory of your loved one.
Funeral services provided by:
Trahan Family Funeral Home - Pensacola
MAKE A DONATION
MEMORIES & CONDOLENCES
0 Entries
Be the first to post a memory or condolences.